LOOK TO MAKE A STATEMENT AT UFC® APEX 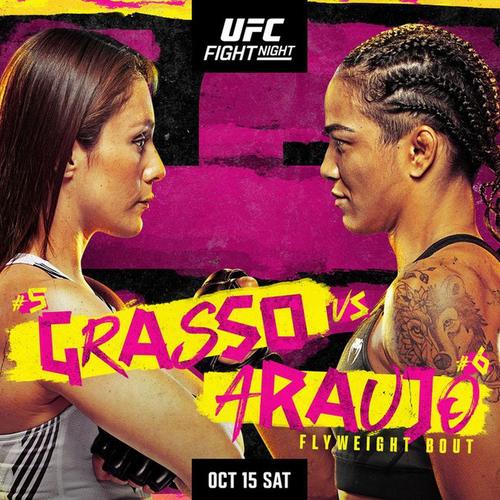 Las Vegas – UFC® returns to UFC APEX with an intriguing women’s flyweight contenders’ bout that will see No. 5 ranked Alexa Grasso and No. 6 Viviane Araujo look to make a statement in their first UFC main event. Also on the card, all-action bantamweights meet as Cub Swanson faces Jonathan Martinez.

UFC FIGHT NIGHT®: GRASSO vs. ARAUJO
will take place Saturday, October 15 at UFC APEX in Las Vegas. The entire card will be available on ESPN+ in English and Spanish, with the main card starting at 7 p.m. ET / 4 p.m. PT and the prelims at 4 p.m. ET / 1 p.m. PT.

Highly touted contender Grasso (14-3, fighting out of Guadalajara, Mexico) intends to rise to the occasion and deliver her most emphatic performance yet. Grasso is currently on the longest win streak of her UFC career, earning victories over Joanne Wood, Maycee Barber and Ji Yeon Kim. She now plans to become the first person to finish Araujo in the UFC and cement herself as a title threat.

Araujo (11-3, fighting out of Brasilia, Brazil) looks to crack into the flyweight Top 5 for the first time in her career. A Brazilian Jiu-Jitsu black belt with dangerous hands, she has secured notable wins over Andrea Lee, Roxanne Modafferi and Alexis Davis. Araujo now aims to make the most of her first UFC main event opportunity with another dominant showing.

Fan favorite Swanson (28-12, fighting out of Palm Springs, Calif.), who was recently inducted into the UFC Hall of Fame’s Fight Wing for his epic win over Dooho Choi, strives to a make a successful bantamweight debut in his first 2022 appearance. Currently tied for the most total fight night bonuses in UFC featherweight history with nine, Swanson has delighted fans with victories over Darren Elkins, Kron Gracie and Artem Lobov. He now hopes to vanquish another rising prospect and prove he can still compete with the best in the world.

Martinez (16-4, fighting out of Plainview, Texas) seeks to extend the longest win streak of his UFC career and make a run at the bantamweight rankings. At 28 years old, he is in his athletic prime and has found his groove with recent wins over Vince Morales, Alejandro Perez and Zviad Lazishvili. Martinez now intends to add Swanson’s legendary name to his resume with a signature finish.