Has Mark Hunt Gone Too Far?

Needle In Your Butt Cheek Any One?
So Riddle Me This
Preach!!!
UFC What now?
Keep these fighters fighting
Where YOU at?
Upcoming Events
Weekly KO #39 | 07-13-2016
Written by Joe Szyc and Ro Ro
Produced & Edited by Ro Ro

The sale of the UFC really happened this time.

We Got Winners…
UFC 198 Results
Bellator 154 had 1 notable fight
Sorry Lebron
If You Don’t Know, Now Ya Know
Upcoming Events

When A Pissing Contest Leaves A Stain

How Bad Is It?

The Many Faces Of Bellator

Then you have Bellator, “The Carnival Act”

Big Baby or The Start of a Revolution

Where does one go from here…

For the Main card

He Said She Said…

Over before it started

The most recognizable cut man in sports finds a home

Haters How You Gonna Hate?

And that’s all she wrote… for MMAStalker.com’s Weekly Knockout

We look forward to joining you next week

We all know “fake valor”, what about a “fake legacy”?

And that is all folks…

And that is all folks…

What did we learn from UFC 196

Listen on Soundcloud
Fight Results
Bellator 150
UFC Fight Night 84
Get This
You get what you give
The C is For Conor
Spend Your Money On UFC 196
Bellator 151
Looking past your next fight might cost you
Upcoming Events
And that is all folks…
Join us again next week for the latest news in MMA on the Weekly Knockout
Weekly KO | 02-17-2016
Written by Joe Szyc and Ro Ro
Listen on MMAStalker.com
Listen on Soundcloud 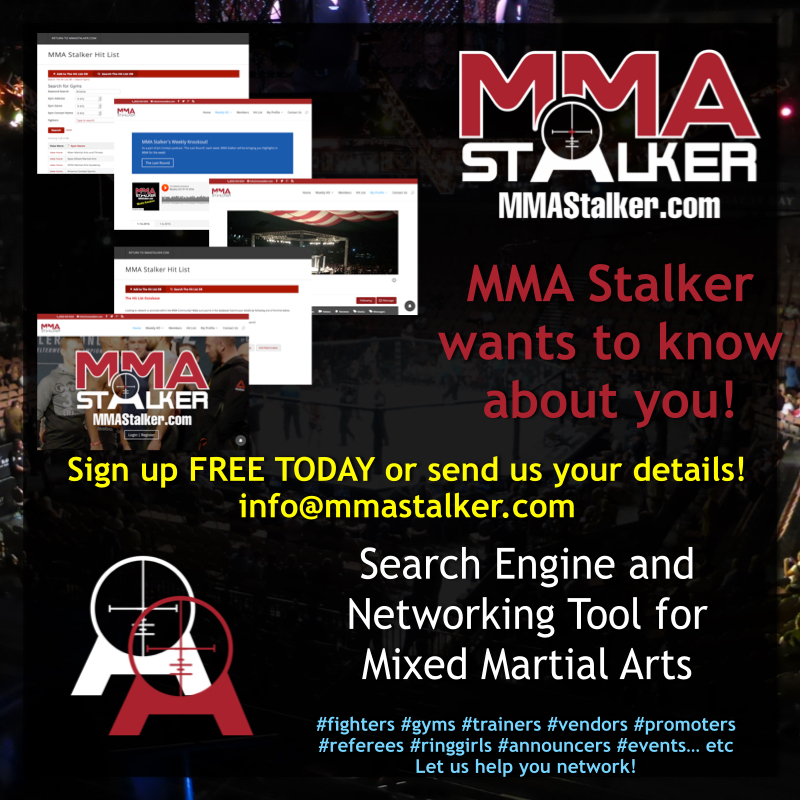 Kids Will Be Kids

Trying To Make A Name

That’s all folks, catch you next week!

What is MMA Stalker?
Quick Hits
UFC 195 Fights I’m excited about this weekend…
2015 did what?
2016 the year of “I want my title back”
You can also expect to see in 2016
Upcoming Events
MMA Stalker would like to wish you a happy and safe New Year! Huge thank you to the Last Round, we look forward to joining you in the New Year!
What is MMA Stalker?
Fight Results/Recaps
Going Big In 2016
Can I get a medic!!!
More Free Agency talk in the community…
He’s back….
I see you One Championship…

ONE Fighting Championship GENERAL REGULATIONS & POLICIES RELATED TO ATHLETES’ WEIGHT 1. Athletes must submit their current walking weight and daily training weight regularly. Athletes will input and track their daily weight online via a dedicated web portal. Athletes may input data weekly but must include daily weights. 2. Athletes will be assigned to their weight class based on collated data and random weight checks. Athletes are not allowed to drop a weight class when less than 8 weeks out from an event. 3. During fight week, weights are checked daily. Urine specific gravity will also be checked the day after arrival and 3 hours prior to the event. Athletes must be within their weight class and pass specific gravity hydration tests all week and up to 3 hours before the event. If an athlete falls outside the weight, or fails a test, they are disqualified from the event. Doctors may request additional testing at their discretion. 4. Catch weight bouts are allowed. However, the athlete with the higher weight will not be heavier than 105% of the lighter opponent’s weight. 5. ONE will conduct random weight checks on athletes at our discretion. 6. Athletes may petition to change weight classes outside of the 8-week competition zone and must be within their new desired weight at that time. In addition, athletes must pass a specific gravity urine test when their weight is within the limits of the newly petitioned weight class. ONE doctors can request additional testing to determine the amount of weight drop allowed over a specific time. 7. The usage of IVs for the purpose of re-hydration will not be allowed. Overage and limits of weight reduction: · 3 weeks to event day: Athlete must be within contracted weight class · 4 weeks: 1.5% bodyweight over max · 5 weeks: 3% · 6 weeks: 4.5% · 7 weeks: 6% · 8 weeks: +6% max over. (ONE Chief Doctor may approve up to +/- 0.5% maximum error in any weekly weight check)

McGregor was listening to RoRo

Say It Ain’t So Joe

Just Askrening you to lose a few pounds

What is MMA Stalker Thankful for…Well here’s our list!

Let’s Talk Bellator! 1 is for the money and 2 is full of show